Strzalkowo rural municipality is located in central Great Poland, directly on the most important road and rail transit routes connecting the east and the west.

An excellent location and favorable communications are the advantages to encourage investors who require quick and very good transport accessibility.

Leading through the district Strzalkowo are: 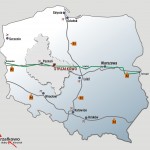 The area of the municipality Strzalkowo is 142 km2, and the population as of January 1st, 2017  is 10,202 (including Strzalkowo 5,402). The economy of Strzalkowo is dominated by agriculture. The agricultural products and livestock animals are known for their high quality. In the municipality's natural gas network is constantly expanded. The pipeline runs through the investment areas located in the immediate vicinity of Strzalkowo. The municipality has 100% electrification and waterworks. The main point of power (GPZ) is approx. 1.5 km from Strzalkowo, and electricity is available in the commune without restrictions. Strzalkowo and its immediate surroundings support biological sewage treatment plant and a new sewerage network. The Internet is accessible from the optical fiber network and through a number of wireless providers. All local roads have asphalt surface.

For all offered investment areas can be provided with: 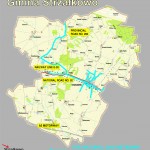 The municipality effectively uses of external funds for investments; one example was completed in 2013: a complex construction of a sanitary sewage system in meters. Strzalkowo obtained one of the largest fundings in the history of the Commune, the support of extra-budgetary funds - the total cost of construction amounted to more than 18 million zł with over 11 million zł funding. Also, in 2010, the municipality was classified by the Marshal's Office in Poznan as one of the most successful municipalities in obtaining EU funds from the Wielkopolska Regional Operational Programme.

In 2014 Strzalkowo Municipality was awarded the statuette "Leader of obtaining EU funds" and certified as meeting the requirements of best of the communities in the European Union.

4. Investment in the region

At the end of 2015 in the District Labour Office in Słupca 381 people were registered as unemployed in the community Strzalkowo. Compared to 2014, this number decreased by 26.31%. The number of unemployed per 1000 inhabitants of the commune of Strzalkowo is 37 people (with an average of 43 people in the district).

At the end of 2015 the unemployment rate in the Słupca county  stood at 11.4% and was higher than the national rate of 1.6% and 5,2% unemployment rate in Wielkopolska. The largest number of unemployed people in the county are young people, aged 25-34 years, and compared to previous years the number of people without work in this age range is decreasing. Analysing the unemployed by education, the highest number represents people with vocational education and post-secondary and secondary vocational education. The unemployed who are registered at the employment office at Słupca for a period of longer than 24 months and from 1 to 3 months are the largest group of unemployed - a total of 1057 people (41.33% of the total unemployed). Analyzing the seniority of registered unemployed, it should be noted that at the end of 2015, the largest group were people with work experience from 1 to 5 years (i.e. 669 people), which accounted for 26.16% of the total. The percentage of unemployed women in the total number of unemployed in the county Słupca amounted to 56,35%. 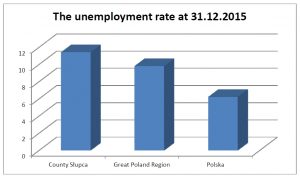 7. Operating in the Great Poland region: